The outdoor drama "From This Day Forward" written by Fred Cranford is the flagship show of Old Colony Players. This drama tells the story of the Waldenses, a people from the area known as the Cottian Alps in Northern Italy near the French border, and the founders of the Town of Valdese.

Purchase Tickets by calling 828-522-1150 order online here, or get them the night of the show with cash or check

The production begins with the early beginnings of the Waldenses' religious struggles to establish their simple Protestant faith and their subsequent persecution in the 17th century by the Roman Catholic establishment. Their persecution came at the hands of religious leaders and the reigning French Monarch at the time, Louis XIV. Though the Protestant Waldenses fought courageously, in 1686 they were driven from their Italian Valleys into Switzerland. The Waldenses in exile quickly began regrouping, planning, and forming alliances with neighboring countries, those sympathetic with the Waldensian Cause or those seeking to overthrow King Louis XIV. Finally in August 1689, 900 men led by Pastor Henri Arnaud began their "Glorius Return" into their valleys. Aided somewhat by King William of England, Arnaud and his men fought their way across their rugged mountainous territory. The final battle took place in May 1690 at a mountain fortress above the town of Balziglia. This fight for religious freedom by this small band of untrained people against overwhelming military might, their forced exile into Switzerland, their fight back into their homeland and final victory was called, by Napoleon no less, "one of the greatest feats in military annals".

After the persecutions ended, the story continues with the Waldenses' life in the late 19th century. The Waldenses continued to suffer harassment and loss of civil rights into the middle of the century. In 1844 King Charles Albert of Piedmont and Sardinia visited Torre Pellice in the Waldensian Valleys to attend the dedication of the new Catholic Church. He was so well received by the Waldenses that he reversed his earlier policy of harassment toward them. Four years later, in 1848, the King issued an Edict of Emancipation granting the Waldenses the same political and legal rights as other citizens.

The land in the Waldensian valley homeland in Italy had become crowded with the ever increasing population since the end of the battles in 1690. The family farms had been divided and redivided over the generations, so there was little land to pass down to future generations. A decision was made to seek land in other countries, including South America and the United States. After much searching, one group of Waldenses selected a tract of land totaling 10,000 acres in an area of Burke County between the towns of Connelly Springs and Morganton, NC. In 1893 a small group of 29 Waldensian settlers emigrated from Italy to the new land in North Carolina, led by their Pastor Dr. Charles Albert Tron. They traveled from Italy to France by train, then to New York aboard the steamship SS Zaandam. From New York they traveled to North Carolina by train with dreams of rich and fertile farm land mingling with homesickness from memories of the valleys. The Waldenses arrived at their destination in North Carolina on May 29, 1893 under the watchful eyes of their skeptical Burke County neighbors. A new group of 18 settlers arrived in June 1893, another group of 14 in August 1893, and another group of 161 in November 1893. Their dreams of rich farms and prosperity were soon shattered by the realities of a cold winter, lack of adequate housing, and rocky soil. Again they had to struggle to overcome the hardships of this new land and the lack of acceptance by their Burke County neighbors. With their strong faith in God, hard work, and perseverance those obstacles were overcome and the Town of Valdese, NC was established.

From This Day Forward, written by Burke County native Fred Cranford, is presented from Mid July to Mid August in the Old Colony Players Amphitheatre on Church Street in Valdese, NC. With a combination of tears in your eyes and laughter in your heart you can witness this story of tragedy and triumph. 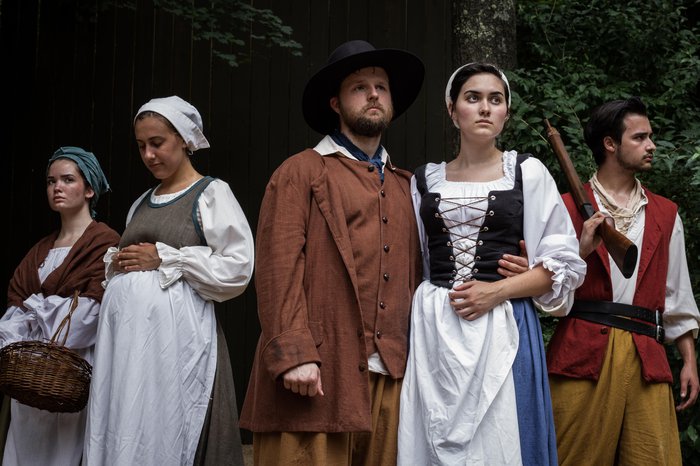 Patty M at the Market