From This Day Forward- Fred B. Cranford Amphitheatre

The History Behind the Drama: The Waldensians are a pre-reformation reformed sect of Christianity. They believed in the priesthood of all believers, translating the scripture into the "common" languages of the people of the day and encouraging education so that all people could read the Bible for themselves. A simple people, they were dedicated to taking care of the poor and justice for the oppressed. The Waldensian Community was excommunicated by the Catholic Church in 1184 at the Synod of Verona. Pope Innocent the 3rd went even further in 1215 declaring all Waldensians heretics. Forced to renounce their religious stances or flee, the small community of believers sought refuge in the Cottian Alps, where life was somewhat protected by the rugged landscape and isolation. Even so, the Waldenses were heavily persecuted by both the Catholic Church and the Reigning Monarchs throughout the region. Perhaps one of the bloodiest episodes in the history of their faith was in 1655 in a series of persecutions known as the Piedmontese Easter. In this series of massacres it is said that thousands of Waldensians were murdered for their faith. It is a mere 30 years later that our play begins. Total annihilation of the Waldensian Faith was the aim, yet throughout all the years of persecution, their faith remained and grew stronger. This is the backdrop to our story. The production is presented annually at the Fred B. Cranford Amphitheatre – mid July through mid-August. 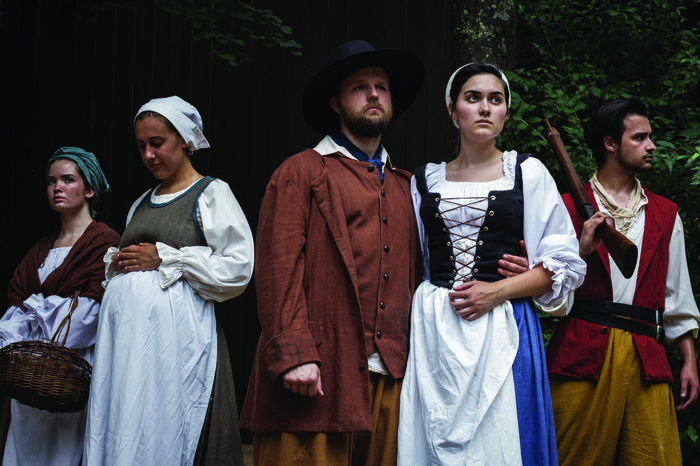 Founded by the Waldensian Presbyterian Church and opened to the public in 1974, the museum offers artifacts and special exhibits remembering the early Italian settlers that founded Valdese in the late 1800s.

Children's Park is located conveniently just off Highway 70 on the east side of Valdese. Children's Park contains a picnic shelter with restroom facilities, a playground area, and a lighted sports field used for baseball, soccer, and softball.

The Old Rock School Auditorium is the home of the Bluegrass at the Rock Concert Series, numerous plays by the local community theater Old Colony Players, dance recitals, graduations, camps, and corporate conferences.

Venture out to this hidden treasure to enjoy a volleyball court, picnic facilities and restrooms in addition to the natural attraction of the 40 ft. high McGalliard Falls.

A locally owned pizza restaurant located in the heart of Valdese.

The Rock School Arts Foundation mission is to offer new and enriching exhibition, program, and art education for adults and children; serve as a cultural destination for tourists and visitors; and act as a resource for our local art communities.