“Sacred Dance and the Muses” is the largest single panel fresco in the United States. It was completed in 2004 by Ben Long, a famous muralist from North Carolina who studied art in Italy and France. The mural was conceived by Bill Wilson, the director of CoMMA at the time and commissioned by The Burke Endowment for the Arts. The project took three months to complete, with Long and his students working 40 hours a week, painting on the ceiling. The piece features the 9 muses, Greek figures who embodied music and theatre. In addition to the muses, Long included the comedy and tragedy masks as well as numerous people from his life including his teacher in Italy, some of his students and even himself. If you have not gotten a chance to see it, go by CoMMA (City of Morganton Municipal Auditorium) during box office hours to check it out and learn more! 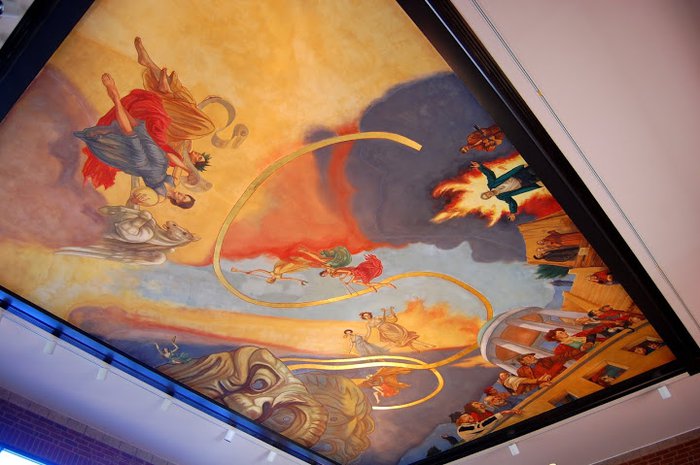 You don't have to play golf to enjoy Silver Creek! Papa's Grill is open to everyone and serves Chef Yvonne's American Comfort Food for lunch, Friday and Saturday dinner, and Sunday Brunch. Sit inside, or outside on the patio or in the pavilion, and enjoy the beautiful surroundings of Silver Creek.

Come relax and pamper yourself at the AmaZen Day Spa. They offer an array of services such as skincare, body work, and nail services.

The cemetery is the earliest identified site associated with white settlement in western North Carolina. The cemetery is locked and gated, but access can be obtained from the Historic Burke Foundation located inside the historic Burke County courthouse in downtown Morganton.

The Brown Mountain OHV area offers 34 miles of trails. This is the only OHV area on the Grandfather District. These trails are mostly designed for trail bikes and ATVs. Jeeps and 4WD vehicles may only use Trail 8 and part of Trail 1.

Unique gallery with local the work of local artists. From yard art to wood turners, it's all here.